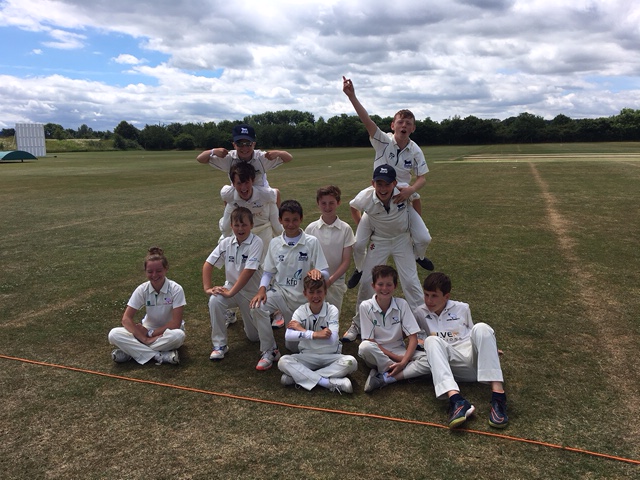 Having beaten Cropedy in the Quarter Finals, Oxford Downs travelled to Bicester & North Oxford CC for the finals day. A semi final against Horspath awaited, with the winners going forward to play either Cumnor or Warborough & Shillingford from the second semi final.

After losing the toss and being inserted by Freddy Selby-Lowndes, Horspath started brightly on a good batting track and lightning outfield.

3 of the Horspath top 4 returned scores of 30 retired, the 4th scoring 27. On 108 after 12 overs, Downs were staring at a large total but rallied superbly through some excellent bowling, particularly from Will Hearn and Jago Churchill, who both picked up 2 wickets. With great support in the field, Horspath scored only 52 from their final 8 overs, posting 160.

Downs started positively against some excellent bowling with Archie and Thomas moving the scoreboard along, before both fell in quick succession.

However, the middle order rallied to great effect with Freddie Selby-Lowndes playing some great shots before being run out for 28 and Will Hearn hitting an excellent 30 retired.

Downs finished the innings on 93 for 4 and performed with great credit against a very strong team.

Downs faced Warborough & Shillingford in the playoff match on pitch 2.

Again, winning the toss, Freddie elected to field and opened the bowling with Finn Law and Will Whittaker, both of whom bowled extremely well to restrict the Warborough openers.

Following more competitive exchanges between bat and ball, Alice made the breakthrough, bowling the Warborough opener with the first ball of her spell.

However, the Warborough middle order came back well and despite Will Hearn picking up another 2 wickets, Warborough posted a very competitive 145 off their 20 overs.

Downs lost Archie early in their reply, followed quickly again by Thomas Taylor to what looked a dubious no ball and so found themselves behind the rate from an early stage.

However, a solid 27 from Benjamin Anker and a run a ball 30 retired from Ollie Armstrong steadied the ship before Will Hearn came in and smashed an exhilarating 13 ball 30 retired to bring the game back in the balance.

Needing 35 from the last 2 overs proved just beyond Downs and despite a gallant last-ditch effort from Finn & Jago, Downs fell 27 runs short of their target.

Despite the results, all the players should feel very proud of their efforts. Everyone performed with great credit and the infamous U13 team spirit was evident to all observers, not least when performing the Haka to a somewhat bemused looking Warborough side!