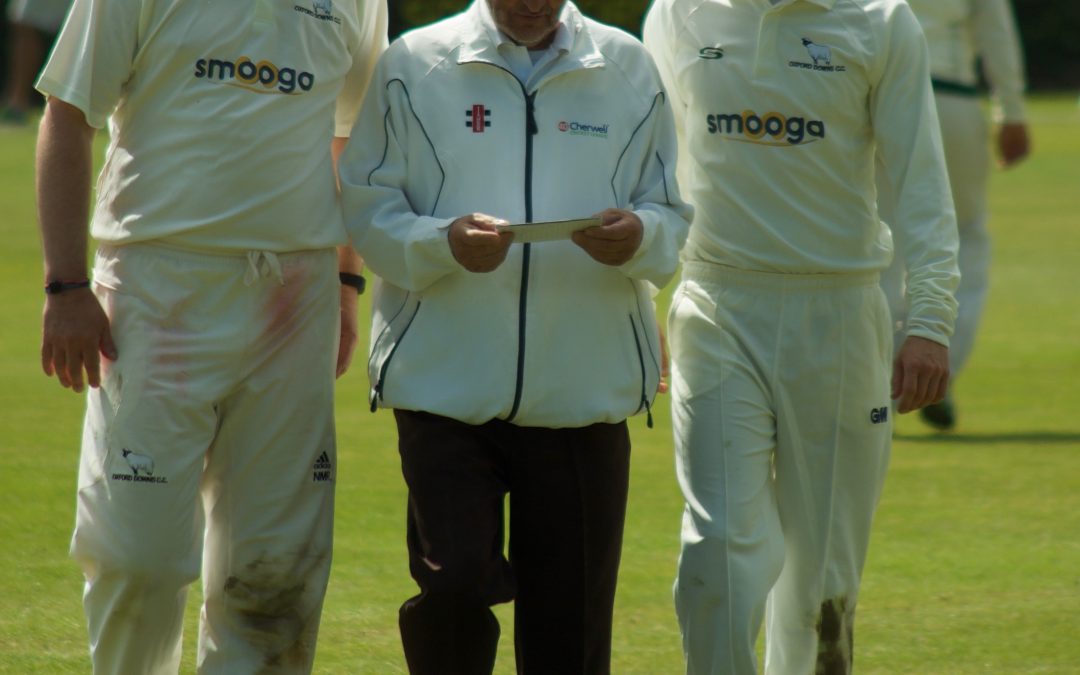 Having beaten Langford in the previous round, Sunday saw the Oxford Downs taking on stronger opposition in Minster Lovell in the Village Knockout.

The Downs lost the toss and Minster Lovell elected to bat on a flat track. Prav Chahal and Nick Rivett (fresh from his 8 wickets the day before) opened up and bowled with superb control with Minster struggling to score. Frustration got to the Minster opener and he drove loosely at Prav and was well caught at Mid Off.

Rachael Potter replaced Prav at the Pavilion End and continued to restrict the Minster batsman bowling a good line outside off stump. She was rewarded when the other opener skyed one to Long On. With plenty of wickets in hand at the halfway stage Minster looked to increase the run rate and made the most of the short legside boundary.

Skipper Waz picked up a vital wicket which was hoped would stem the flow of runs however Minsters talented lefthander continued to find the boundary regularly. The Downs players became frustrated at times in the field which showed how much his competition means to the players.

Overs 39 and 40 saw the Downs concede just 9 runs and the players left the field feeling that the momentum had just started to swing back their way.

Despite being set an intimidating 245 to win, the home side were confident that with their strong batting line up, a flat track, quick outfield and short boundary, this total was within reach.

After a slight rain delay the Downs innings got off to a shaky start with the skipper falling early to a shot he won’t wish to see replayed! Will Watts joined Frankie Crouch at the crease and the score ticked along before Frankie played on. The fall of the second wicket saw the arrival of James Ellwood to join Watts. These two batted very sensibly, running well and punishing the bad ball when it came along. The required run rate however continued to grow but despite this the Ellwood and Watts remained calm knowing that with wickets in hand anything around 10 an over would be possible in the closing overs.

After a brilliant stand of 98 Ellwood was well stumped for a brilliant 56 leaving the Downs with still 100 runs to get. George Sandbach joined Watts and kept the Downs on track with boundaries coming with more regularity.

The tension could be felt amongst players and supporters as the match drew towards a thrilling climax. Watts fell for superb 63 a with the Downs requiring 39 off the final 4 overs bringing James Lauder in to join Sandbach. With Sandbach on strike for the start of the 37th over it soon became clear that he wasn’t feeling the nerves as he scored 16 of the first 3 balls putting the Downs firmly in the driving seat.

Some good running coupled with a couple of further boundaries from the two batsmen saw the Downs home with an over to spare, George finishing with an unbeaten half century to go with his 172no from the previous round. A breath taking finish to a wonderful game.

This victory sees the Downs travel, full of confidence to Aston Rowant for the semi finals in what will be a big challenge.